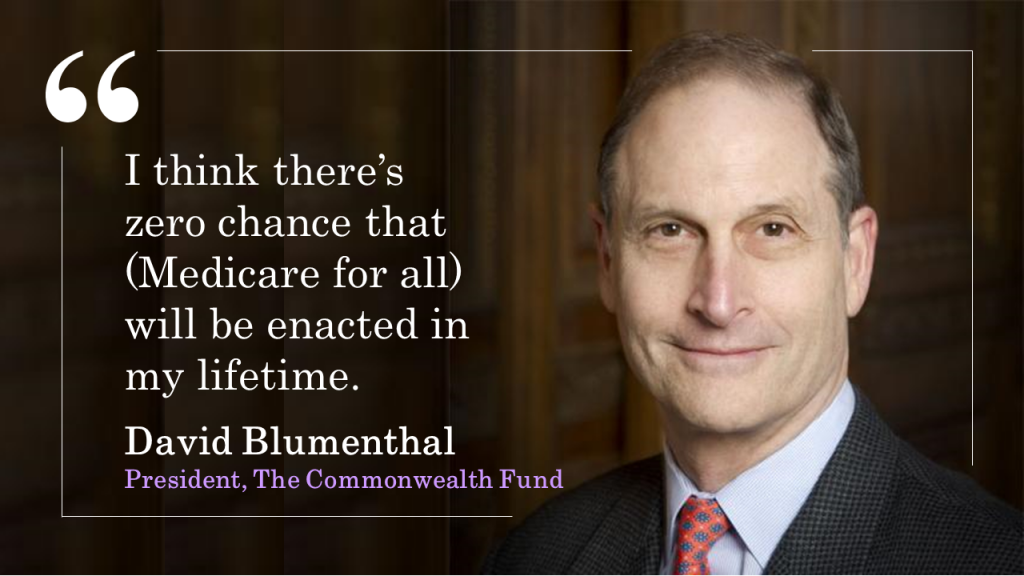 Welcome to a new season of the Fixing Healthcare podcast. As co-hosts Robert Pearl and Jeremy Corr turn their attention to the politics of American healthcare, they were eager to greet the first guest of season three, David Blumenthal.

David is a healthcare policy expert and president of The Commonwealth Fund, a national philanthropy engaged in independent research on health and social policy issues. He’s a former primary care physician, director of the Institute for Health Policy, and professor of medicine and health policy at Harvard Medical School. Under the Obama administration, David served as the National Coordinator for Health Information Technology, in charge of building a nationwide health information system and supporting the “meaningful use” of health IT.

In this episode, David tackles health policy topics that range from Medicare for all to cyber security to his role in the computerization of medicine under the Obama administration.

Here are some of David’s most memorable quotes:

On government in promoting research and innovation

I think government is uniquely suited to do research and development and to lead the implementation of innovative ways of improving the delivery of healthcare services and in doing so, to find ways to stimulate and promote innovation in the private sector while also providing leadership.

We need to find ways to make [medications] affordable, and I think that means moving away from some outdated protections of intellectual property—some, for example, associated with the Orphan Drug Act and also some of the abuses of patent law that have arisen as pharmaceutical companies try to protect their intellectual property.

On educating lawmakers about healthcare

Senators and congressmen are pretty representative of the people that elected them. They’re lay people. They are not sophisticated in their understanding of technical issues whether it’s transportation or energy or health, and that to convince them of a policy, you have to reduce it to understandable lay terms.

On the goal of electronic health records

If we prioritized quality and cost control as the most important priorities for our healthcare system, electronic health records (a) would have been adopted without government incentives and (b) would be different than they currently are. They would have been developed with those goals in mind rather than as they were, with the goal of recapitulating the paper record and assuring in the process that revenues for organizations were maximized.

On the role of The Commonwealth Fund

We believe that facts still matter. We believe there is such a thing as valid information. And we believe that it is the responsibility of those who develop such information to communicate it effectively to decision makers. It’s not enough to do the research or do the analysis, throw it out into the stratosphere and hope for the best. So, we try to produce the right information at the right time in the right way for the right people.

I don’t think it’s politically realistic and I say that having been involved in multiple efforts over my career to enact comprehensive national health insurance. I don’t think that the American congress in the business of putting industries out of business. I don’t think they’re going to force the insurance industry to close shop. And I think the prospect of ripping insurance away from 160 to 180 million Americans is an insuperable political obstacle to Medicare For All. That says nothing about the merits of the idea, it’s simply a political judgment. I think there is zero chance that it will be enacted in my lifetime.

READ: Full transcript of our discussion with David Blumenthal