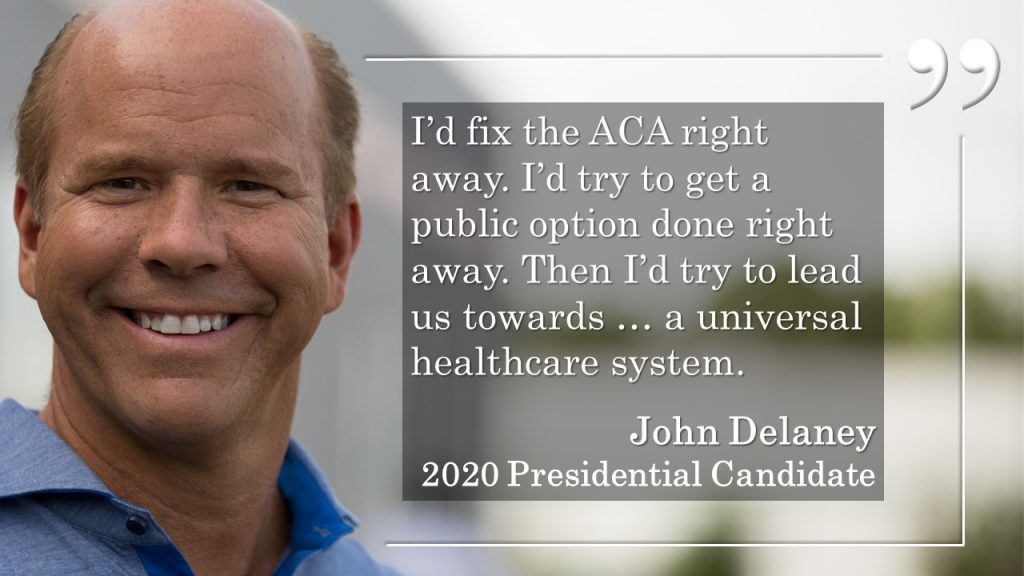 Presidential hopeful John Delaney joined the Fixing Healthcare podcast to spell out his plan for the future of American healthcare policy.

In this, the second episode of season three, physician and healthcare leader Robert Pearl quizzed Delaney on the specifics of his universal healthcare platform, which he dubs BetterCare. Fixing Healthcare cohost Jeremy Corr asked questions that are no doubt on the minds of patients, many of whom are finding healthcare increasingly unaffordable.

Delaney is an American attorney, businessman and Maryland politician who is running for President of the United States in 2020. In 2017, he became the first Democrat to announce his run for president in 2020. Delaney co-founded two companies that were publicly traded on the New York Stock Exchange, including Health Care Financial Partners (HCFP), to loans available to smaller-sized healthcare service providers. Delaney is the author of a 2018 titled, The Right Answer: How We Can Unify Our Divided Nation.

In this interview, John Delaney explains his history as a healthcare businessman, outlines his innovative platform “BetterCare,” and tells voters why both Sanders and Trump are dead wrong about healthcare financing.

Download the complete transcript or check out some of the highlights from the interview here:

I think we have to think of three things: that is access, quality and costs, because healthcare is really all of those things. When we think about reforming our healthcare system, which I do believe is broken, our goal should be to create a system of universal access so that everyone has access to healthcare.

What I would do initially as president in my first 100 days is what I call “fix the Affordable Care Act,” because I think the Affordable Care Act was a very important step forward and it was a good law. But there are some things that need to be fixed. Principally, a mechanism needs to be created to take some of the higher-risk patients out of the various exchanges that have been established or could be established around the country, because some of these patients really do skew the economics of exchanges.

The second thing I would try to do with my first 100 days is put in place a public option, which I think would significantly improve the American people’s ability to get healthcare. I would likely model the public option around something that uses the Medicare provider network, which I think is the most trusted provider network in the country, and creating a low-cost, very efficient public option that everyone would have the opportunity to buy into. I think it would significantly improve healthcare in this country. But then, thirdly, I’d want to work towards a form of universal healthcare because I think healthcare is a basic human right and I also think it’s smart economic policy.

I think if every American had a basic healthcare package as part of citizenship, they would be able to be more economically mobile either as entrepreneurs or just in pursuing economic opportunities, because, unfortunately, I think a lot of Americans are shackled to their job because it’s the way they get their healthcare.

The way I would create a universal healthcare system is along the lines of the proposal I rolled out, which is called BetterCare. Under BetterCare, we leave Medicare alone because it works. While it’s not perfect, it’s probably the best part of our healthcare system. I wouldn’t make any changes to Medicare. But what I would do is I would create a new program that everyone gets from when they’re born to they’re 65 and then when they’re over 65 they go into Medicare. I would roll Medicaid into this new federal program because Medicaid is really a broken program around this country.

The way the new federal healthcare plan would work under Bettercare is even though you get a basic government healthcare package as a right, you don’t have to take it if you don’t want to. So, I would give the American people choice, and the way that would work is everyone would get their basic healthcare, they could take it or not.

After college and law school, I became an entrepreneur. My first business with two partners was a home healthcare business where we provided healthcare into people’s homes. Fairly traditional home care services, but this was in the late ‘80s, early ‘90s. It was somewhat of a new service at the time.

The second company of mine was called Health Care Financial Partners and what it did is it focused on financing small to midsize healthcare companies all over the country. Things like rural hospitals, long-term care providers, home health care, large physician practices, diagnostic companies. During the time I ran the business, we made loans to a thousand healthcare companies all around the country.

I think I’d be the only president who ever has any experience in the healthcare business, which is maybe one of the reasons why we’ve had such a broken healthcare system, historically.

The fundamental problem with the single-payer proposal that a lot of politicians put forth is … we have no evidence to suggest that the government ever pays the cost of healthcare. I think Medicare is a great example of that because Medicare only covers about 90% of healthcare costs. Medicaid I think covers 80% and commercial insurance pays 120%. So, I’d like to get Medicare rates up to, more approximate, the cost of healthcare because I think that would create a healthier healthcare marketplace.

Bernie Sanders … says, well, the hospitals have a lot of bad debt and, if you had Medicare for all, then all that uncompensated care would get paid, and he’s right about that. That would add revenues to hospitals, there’s no question about it. But if you look at the 30 to 40 percent of their business that’s commercial insurance, and you were to cut that in half, the additional revenues from uncompensated care would not cover the lost revenues from everyone getting paid at Medicare rates.

Trump made this kind of dumb statement at one point, but he was right when he said healthcare is complicated. It’s such an incredibly complicated system. I mean it’s almost 1/5th of our economy. It’s really thousands of systems layered upon themselves.

Medicare for all absolutely achieves universal access, just like my plan BetterCare does. But it will undoubtedly lead to a reduction in quality and increasing cost, in my opinion. I think the reduction of quality could get so significant that it actually starts leading to limited access.

I don’t think there’s any chance Medicare for all ever becomes law in this country because it’s fundamentally bad healthcare policy. If you reimburse the U.S. healthcare system at Medicare rates, hospitals all this country would close. That’s never going to happen politically.

Medicare is not a single-payer program. You get basic Medicare when you’re over 65, but then you have choices. You can get a supplemental plan, but you can opt-out and buy Medicare Advantage. Under Medicare for all, you can’t do either of those things. So, I just think it’s bad healthcare policy, it’s terrible politics, it’s never going to happen. But we should have universal healthcare. We just need a smarter plan than that.

There (are) two issues with pharmaceutical prices in this country, which are really out of control. There’s the easy issue that all the Democrats running for president talk about, which is that the government should negotiate Medicare rates, which of course we should … But the deeper problem in many ways, and the problem that’s a little harder to get your head around, is the fact that the U.S. is really subsidizing the whole industry. What I mean by that is if you break the world down into two types of countries, poor countries and wealthy countries, I think we all agree that poor countries ought to be able to buy drugs really inexpensively, because if we don’t provide them drugs at a low cost, they won’t have access to them.

I think we should also all agree that the wealthy countries should largely pay about the same for drugs. What I mean by that is folks in Germany should pay the same as U.S. citizens for their drugs. That’s not what’s happening. Folks in Germany may be paying a third of what we’re paying and the reason for that is they have one person who negotiates the prices no matter where you buy the drugs. In many ways, those people negotiate the prices down below costs. To some extent, pharmaceutical companies don’t even care that much because they can just keep raising the prices here. So, in reality, the entire profit of the pharmaceutical industry is made in the United States of America. That’s just not fair.

Just go to any rural hospital in this country, ask them how it would be if, in the prior year, all their bills were paid at the Medicare rate. Pretty much everyone I’ve ever walked into told me they would close.

The only way out of our healthcare situation is to have a more empowered patient. Our healthcare system has really taken the patient out of it. There are very few rewards for patients to be healthier in our healthcare system right now because the bulk of healthcare that they receive is paid for by someone else. Even though they have in some ways crushing co-payments and out-of-pockets, they don’t see how those things go up or down based on how healthy they are. It’s a situation where the consumer is really disconnected from the cost of healthcare and they don’t shop for healthcare the way they shop for other things. So, there hasn’t been the ability to rein in cost that I think we really need to do.

I think the government’s role as it relates to vaccines is requiring vaccines. That doesn’t mean we should require a vaccine for everything. If certain diseases can be vaccinated against, but they can only be transmitted based on certain behavior … I don’t think those should be mandated vaccines. But for diseases that are readily transferable and can lead to public health outcomes, and your behavior doesn’t really change whether you would get them or not, then I think the government should require vaccinations.

READ: Full transcript of our discussion with John Delaney