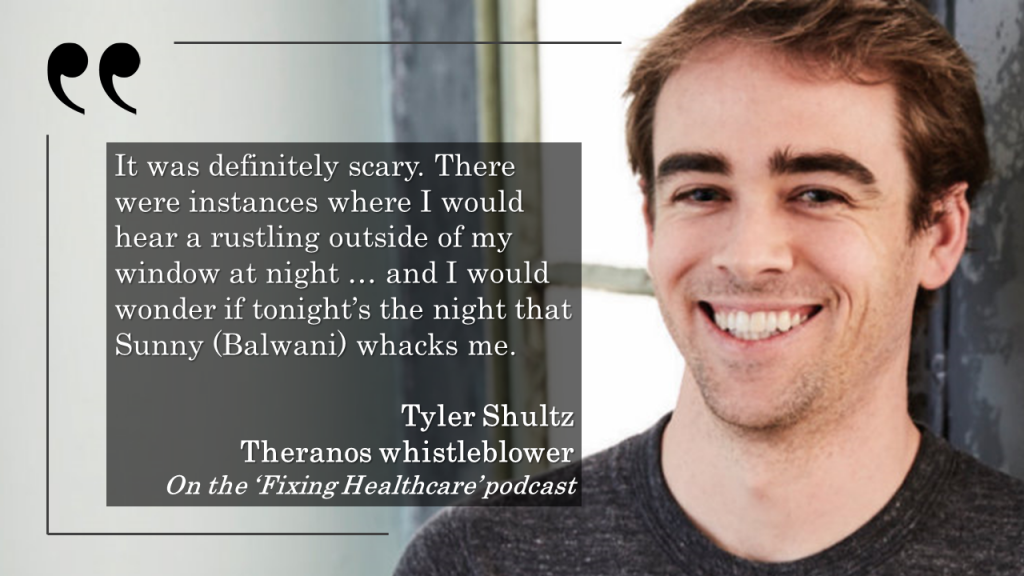 After eight months of working at his first job out of college, Tyler Shultz was at a crossroads. He realized the device that he was hired to engineer was a total flop. After a bit of soul searching, Shultz made a life-altering choice. He blew the whistle to federal regulators. Not long after, Theranos’ billion-dollar valuation imploded, creating the biggest bust in Silicon Valley history.

“A good lesson learned is to be wary of a charismatic leader,” Shultz said of Theranos founder Elizabeth Holmes.

Today, Tyler is a biotech entrepreneur and a leading voice on the topics of corporate governance, business ethics and the role of government in regulating healthcare. In this episode of Fixing Healthcare with Dr. Robert Pearl and Jeremy Corr, Tyler opens up about what went wrong at Theranos and what could be done to prevent the next billion-dollar hoax.

Here are some interview highlights from Episode 15:

“Elizabeth was amazing at being able to flip me on my head. I would be working in the lab thinking, oh my God, this thing is never going to work. It’s giving us terrible results. And then, I would go and I would have one conversation with Elizabeth and I would leave thinking, wow, I’m going to change the world working at this company for the rest of my career.”

“Elizabeth raised $900 million and not a single investor ever saw an audited financial statement, which is mindboggling. It’s totally mindboggling. I started my company, I’ve had investors ask me for an audited financial statement and I’m trying to raise a $1 million seed round, not $1 billion. That point really astounded me that the investors just really didn’t seem to do even the most basic type of due diligence.”

“The last conversation I ever had with her was actually a Thanksgiving dinner after I had quit … She actually came to our family’s Thanksgiving. It was a very intimate setting. It was just me, my parents, my brother, Elizabeth, her parents and my grandparents. It’s not like there were 100 people at this Thanksgiving dinner. It was a small dinner, and at the table, Elizabeth raised her glass and gave a toast and said, ‘I just want to say that I love and appreciate every member of the Shultz family.’ I remember lifting my glass and my hand was literally shaking because of all of the emotions I was feeling at the time. That’s the last time I talked to her. Other than that, it’s all been through the lawyers.”

On the red flags at Theranos

“Theranos had a very, very intense culture of secrecy. The labs weren’t supposed to talk to each other. There were barricades up all over the place or locked doors. And then, you had bulletproof glass, bulletproof windows.”

On the lessons learned

“What I’ve learned is that there’s actually much safer ways to blow the whistle. I think part of the problem was that I actually didn’t even recognize that I was really in a whistle-blowing situation. I was really just reacting to situations and doing the best I could with the information that I had … For example, if I were to have just taken everything that I had seen, any data that I had and I just went directly to the SEC, then I would have been protected and Theranos wouldn’t have been even able to threaten to sue me over things that I had just told the SEC. So, the government will protect you. But I didn’t even know about that.”

On the role of government and regulation

“When the CMS (Centers for Medicare and Medicaid Services) inspectors came through to give Theranos their CLIA certification, they actually weren’t even shown the lab that had the Theranos devices. They were only shown the lab that had the third-party equipment, because … almost all of the tests were run on third-party equipment and not on Theranos equipment … They knew that Theranos was this highly lauded company who had supposedly come up with this revolutionary technology to do blood testing and then they go and do the inspection, but they don’t even look at that piece of technology. It just seems very strange to me.”

On what it was like to blow the whistle

“I was extremely stressed. I was almost debilitatingly stressed during that period of time, where I would wake up in the morning and just think that today is going to be the worst day of my life. I wish I didn’t have to get out of bed, but somehow I’d pulled myself out of bed and I would charge forward.

“There were instances where I would hear a rustling outside of my window at night and my heart rate would go up to like 180, and I would wonder if tonight’s the night that Sunny (Balwani) whacks me. I would really peer out my window trying to cautiously see what was making the noise. Eventually, I’d see like a deer raccoon or something, but I did sleep with a knife next to my bed and I carried pepper spray with me pretty much anywhere I went. Not that that would really do anything, but it was something of a pacifier.”

READ: Full transcript of our discussion with Tyler Shultz