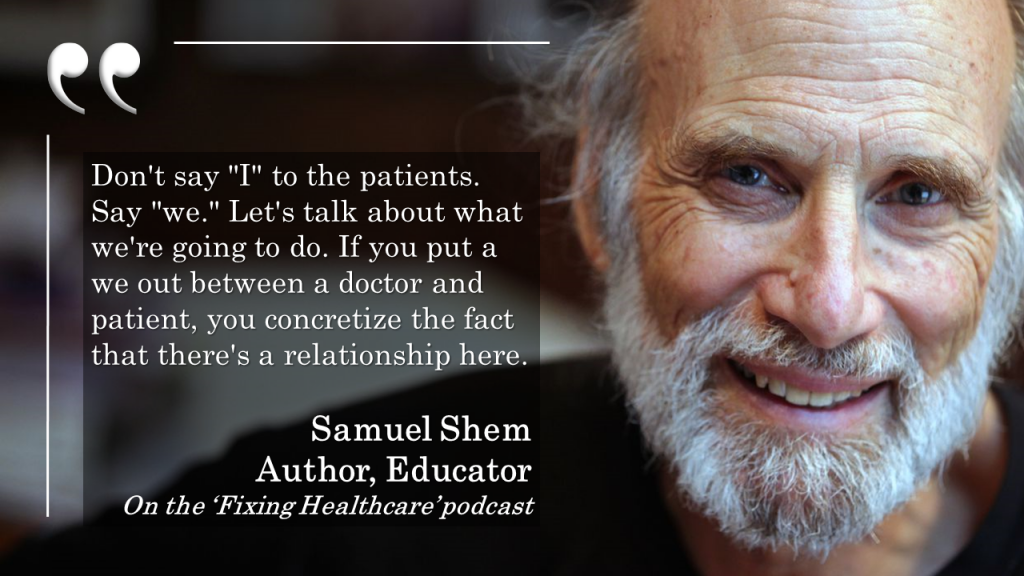 Stephen Bergman, who goes by the pseudonym Samuel Shem, took the medical and literary worlds by storm in 1978 when he published his provocative satire “The House of God,” based on his clinical internship at the Beth Israel Hospital, a teaching facility associated with Harvard Medical School in Boston.

The cult novel, which the New York Times described as “raunchy, troubling and hilarious,” sold over 2 million copies and served as the backdrop for Shem’s latest work “Man’s Fourth Best Hospital.” Set in a nearby institution, Massachusetts General Hospital, now 40 years later, Shem pulls us into the present, taking a critical look at the failures of American medicine today.

In this episode of Fixing Healthcare with Dr. Robert Pearl and Jeremy Corr, Shem reflects on why “The House of God” remains relevant, why the doctor-patient relationship is faltering and what can be done to combat the “abuse” of doctors.

Here are some interview highlights from Episode 16:

On what’s different about medicine today

The biggest difference that has caused all the trouble … are the computer screens that are linked, that link data to payment, that link code to cash. As you know but the public doesn’t know, it’s mainly, in a lot of ways, a billing machine or a cash register (and) that we doctors are at these machines from 60 to 70, 80% a day because we are tasked with the job of fighting for the highest payment of our diagnosis that we’re putting down. On the other side of the war of the screens, the insurance drones are trying to pay the least for each of the codes we click. Like all wars, it’s about money.

On what’s still the same

Well, at best, the same is the same. I’m a writer of resistance to injustice, and the injustice, both in “The House of God” and in “Man’s Fourth Best Hospital,” is the doctor-patient relationship. The injustice of being forced in a system where you can’t really do what you want to do and, as you know, what we docs came into it for, which was to help people, to make contact and guide them through their suffering, and be there at the worst times in their life to help them through.

On the high hopes of treating patients

Well, “The House of God” is a story sort of one step off real of my internship where it’s really going through the internship with five other interns as major characters. This character called the Fat Man, who is their resident that teaches them, who’s the hero of the book, of both books, and who is this marvelous kind of huge-in-every-way, wise, foolish-in-a-way, expert teacher and doctor. The book is about how the sort of innocent interns, including the narrator, Roy Bash, enter this system with all high hopes of being humane doctors and treating patients well, and, alas, this big hierarchal system does not allow them to do what they think is in the best interest of their patients.

On the treatment of women in his books

There were criticisms, valid criticisms, by nurses especially, who are mostly women, that oh, the way you portray women in this book, this is really not very good, blah, blah, blah. I plead that that’s the way it was. That’s the only defense I had. I write not only real, I wrote one step off real, my editor said, which brings out the humor. I write from real. What I’ve done consciously in “Man’s Fourth Best Hospital,” because it’s such a different era, that you will be pleased to hear, and everybody will be pleased to hear, that when the Fat Man founds this clinic leaning up against man’s fourth best hospital, this public clinic, by the end of the novel, we have achieved parity with women. There’s as many women as men, which really makes me feel good because that’s the way it is now.

On physician suicide and burnout

Yeah, the thing that the students are most riveted by in the book is when we come to the chapter with the suicide. That’s because, here’s linking it to your question, that’s because there is an increased rate of suicide not just in doctors, which is big now. That’s because of “burnout,” which I would much rather call abuse because burnout makes it feel like we’re not up to it. Abuse makes it, I think, clearer. Anyway, there are suicides, and suicides are up in medical schools, too, which I find incredibly moving. These kids who have just worked and worked and worked to get into medical school and then, often, on the edge of leaving medical school or first-year, that’s when suicides happen, the transition. It’s because they get isolated.

READ: Full transcript of our discussion with Samuel Shem