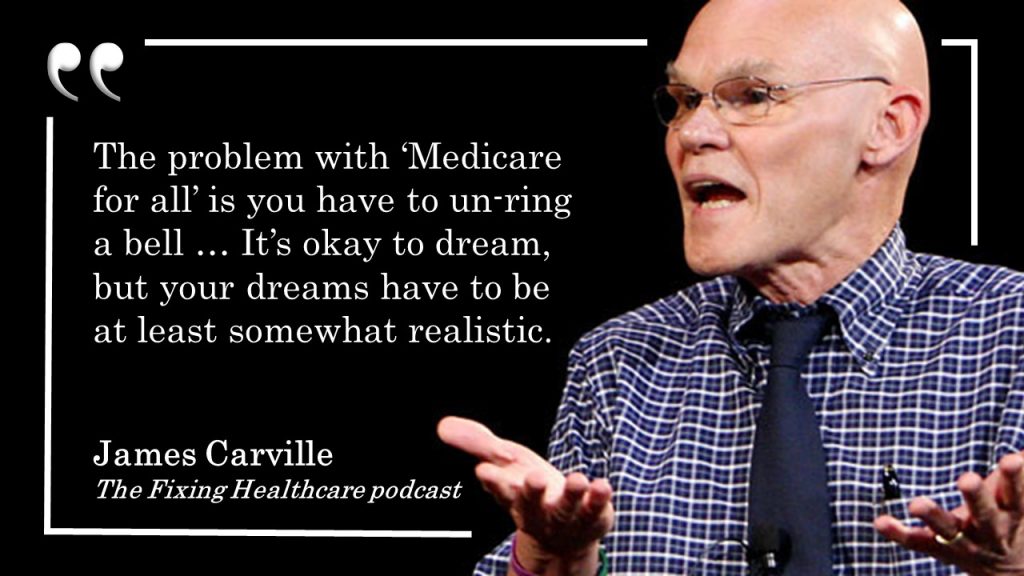 In this episode, we welcome James Carville, one of the most recognizable figures in American politics.

Carville came to fame as the lead strategist on Bill Clinton’s 1992 presidential campaign run, coining the now-ubiquitous phrase, “It’s the economy, stupid.” He has worked as a political commentator for both CNN and Fox News, and remains a powerful voice in politics today. Carville hosts now the “2020 Politics War Room” podcast alongside political insider Al Hunt. He joins us now, in season three of the “Fixing Healthcare” podcast, to talk about the 2020 elections, the possibility of legislating major healthcare changes and the effects of climate change on public health.

Here are some James Carville highlights from Episode 17:

On the dangers of trying to reform healthcare as president

On drug prices and research funding

I think it’s a terrible thing in a country of this enormous wealth where we have people that are priced out of getting the kind of pharmaceutical help they need … One of the things that the pharmaceuticals say, “Well, we need this [funding] because we need to do ongoing research.” I think there’s a compelling case to make, a public case to make, is let the federal government fund the research. You apply for grants like you do for anything else and you have a board of physicians that determine what’s meritorious research or not. And then you say, “Okay, we’ll pick up the research costs for you.” If that’s what standing between people living and dying, the amount of money, like I said, they can do the research.

On hospital consolidation and monopolistic pricing

I live in New Orleans and maybe there’s something here that Ochsner [Health System] hadn’t bought, but it’s kind of hard to find. And I just have to believe, based on just everyday experience, that the reason that they’re gobbling all the people up, becoming consolidated, is because they want some price power … As you have consolidation, you have increased political might. So, they’re going to be more formidable now than they were five years ago. That’s just a fact.”

On the political unlikelihood of ‘Medicare for all’

Look if we were going to start from scratch, we’d do a lot of stuff different. All right, I wish I could start from scratch. I’m 75 … You going to tell an Alameda County firefighter in California that you don’t have your health insurance anymore? That you’re in Medicare? I don’t think that’s going to work … The problem with Medicare for all is you have to un-ring a bell.

On climate change and public health

I mean the public health ramifications of climate change are beyond comprehension. And of course, as you would expect, as always the case, is disproportionately going to affect poor people. And this, I can tell you, we have so much water and it’s coming our way in Louisiana. It’s horrific. And I am very depressed and skeptical about the ability of the world to deal with this issue.

First of all, you would have real strengthening, deep strengthening of Obamacare. You’d have a pretty significant expansion of the number of people that actually had health insurance … And I don’t think there’s any doubt, they would have a hard time not dealing with the prescription drug issue.

READ: Full transcript of our discussion with James Carville