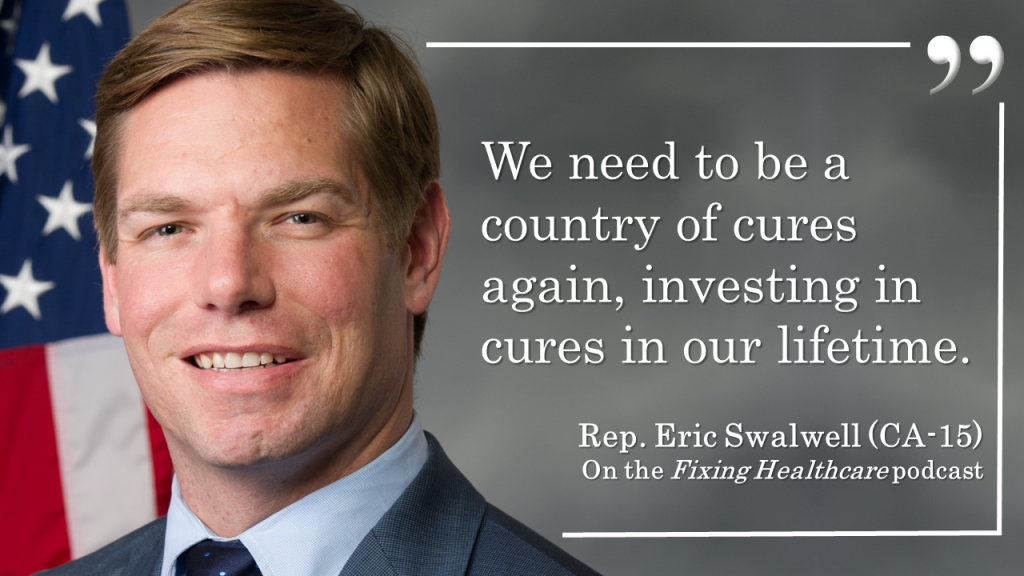 In this episode, we welcome Representative Eric Swalwell, from California’s 15th Congressional District.

A former presidential candidate and a rising star in the democratic party, Eric serves on several House committees, including the high-profile Judiciary and Intelligence committees. He’s now in his fourth term and joins the Fixing Healthcare podcast to offer his thoughts on the role of government in advancing our nation’s healthcare agenda.

Here are some of Eric Swalwell’s highlights from Episode 18:

On his top 3 healthcare priorities for America

First and foremost, I would make sure that every family in America has access to healthcare. And healthcare to me includes prescription drugs … The second, I think it’s really about the future of medicine, in that we need to be a country of curers again, and investing in cures in our lifetime … And then third would be to just make sure that our children, at the earliest of ages, are educated about diet and exercise.

On getting bipartisan support to lower drug prices

On how we can become a ‘country of cures’ again

I think when it comes to cures, the private sector, that’s where you find the ingenuity and the people, but it’s really going to take public funding to get there.

On whether ‘Medicare for all’ is the best option

I’m a big supporter of Medicare for anyone who wants it. Essentially, a hybrid system, where the Federal government would dramatically increase what it contributes to healthcare, to have a public option. Not to eliminate private insurance, but with a robust public option, to make private insurance more competitive, and frankly, more accountable on their costs, and who is covered.

On the role of parents in promoting proper diet and exercise

I think Michelle Obama was the biggest person to try and make strides on this, and she was ridiculed, and it was politicized, sadly. But I think really making sure that our kids, and what they eat at school, and their preschools, really set them on a course for a healthy lifestyle, so that you can head off some of the costlier issues that they would take on later in life.

READ: Full transcript of our discussion with Eric Swalwell