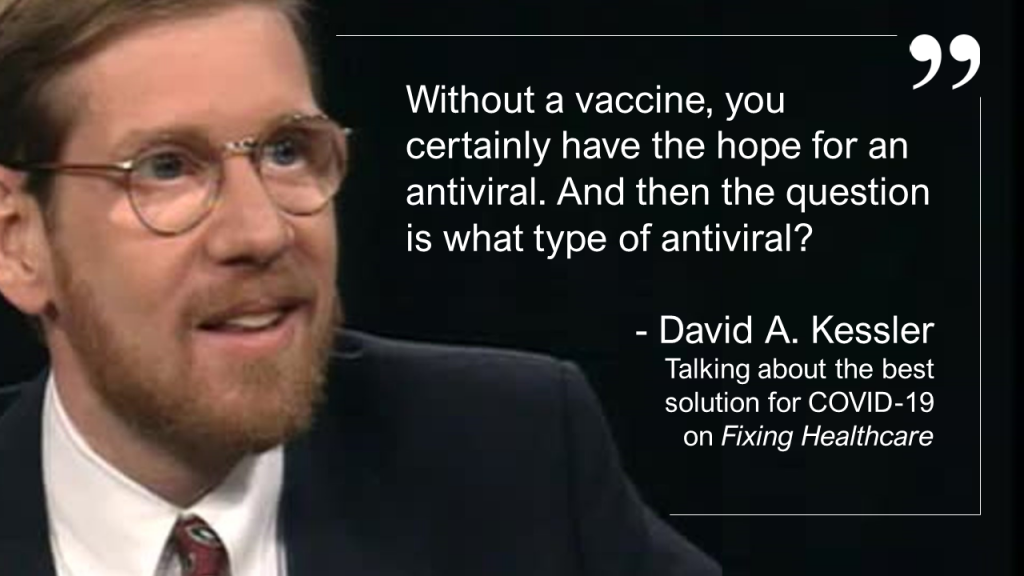 As head of the Food and Drug Administration from 1990 to 1997, Dr. David A. Kessler went to war with cigarette companies, approved life-saving HIV/AIDS medications, and introduced consumers to Nutrition Facts.

He is the author of several books, including his latest, “Fast Carbs, Slow Carbs: The Simple Truth About Food, Weight, and Disease.”

In this interview, Kessler comments on what it will take to end COVID-19, how he handled the pressures of the FDA, and why we shouldn’t overlook the dangers of marijuana or bagels.

Here are some of Dr. Kessler’s highlights from Episode 22:

On the most promising COVID-19 medications

Without a vaccine, you certainly have the hope for an antiviral before a vaccine. And then the question is what type of antiviral? Is it going to be an antiviral to treat this disease or prevent infection? It would be great to have a prophylactic antiviral. And there are certainly a lot of clinical trials underway. There’s anecdotal information right now. There’s reason to hope that there … may be an existing antiviral or a new antiviral will be able to demonstrate efficacy.

On slowing the spread of COVID-19 without a vaccine

I’ve been thinking very hard about this question and the only answer that I can come up with of how to allow people to come out of their homes, out of the sheltering in place, is widespread testing. And the basics of public health, contact tracing, but either serological or virological, we’ll see where we are …  in the absence of a way to treat this virus or prevent this virus, the only thing we have is that we identify those who are infected, and we do that through widespread testing. So I think the answer is testing, testing, testing, and to do what China and South Korea and several other communities have done, identify those who are spreading the virus and protect others from that spread.

On the CDC’s COVID-19 testing delays

We’re still very much in the midst of this crisis. I think at certain point we will look back and try to sort that out. I certainly have questions about what happened and I don’t think we have the whole story yet, why we lost a number of crucial weeks, if not months, in fighting this virus. I don’t know the whole story, and I don’t think anybody does. I think that’s for some time in the future, once this is behind us. We have to make sure that it doesn’t occur again.

On his advice for current FDA commissioner Stephen Hahn

The job is white heat. There are thousands and thousands and thousands of people who try to influence the agency’s decisions and today, or you could see it play out at the highest levels of government. The administration trying to influence, get this drug to the market, approve this drug, do it immediately. And what you have to do is be willing to put your body on the line and allow the people of the agency to look at the data and to focus on the science and make the best decisions they know how to do. And your job is to protect that decision-making process.

On handling the pressures of the FDA

In the same breath, reporters can write that the agency is either acting too fast and not taking safety into consideration or too slow and holding up important drugs. I think we’ve developed probably the most sophisticated drug regulatory system in the world. I think we are as fast as any country in the world and yet I have tried to maintain rigorous standards. That doesn’t mean FDA doesn’t a mess up. It does do that sometimes.

READ: Full transcript of our discussion with David A. Kessler