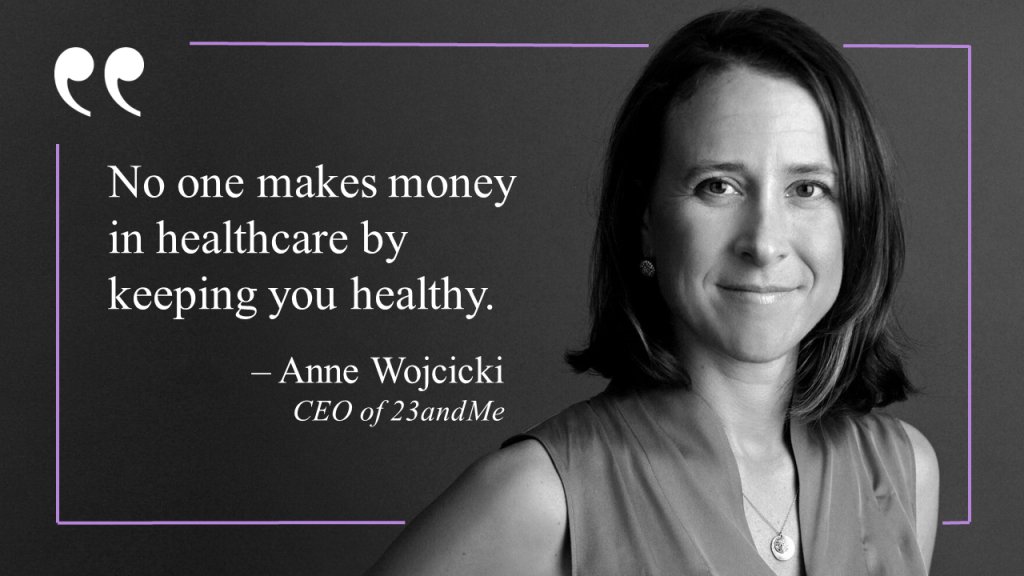 Anne Wojcicki is a biologist, entrepreneur and the CEO of 23andMe, the leading consumer genetics and research company with more than 12 million customers worldwide.

On this episode, Wojcicki spoke with Dr. Robert Pearl and Jeremy Corr about exciting developments in genetic testing, the possibility for at-home coronavirus testing, her company’s fight with the FDA and what she believes will someday replace primary care.

Here are some of the interview highlights from episode 24:

On genetics and depression

Thanks to the 450,000 customers who answered our surveys, where we were able to find a number of novel mutations associated with depression. Most studies are in the hundreds or maybe a thousand individuals, but for us to have a study of 450,000 people, it shows the type of scale of research that 23andMe can do and the fact that we can make findings that no one else really can find.

On a genetic basis for the human response to COVID-19

23andMe launched a COVID-19 study on April 6, and we now have over 1 million people who’ve taken this survey. We have … tens of thousands who said that they have it, thousands of people who were hospitalized. We were able to make a number of discoveries. The only one that we’ve publicly talked about is the O blood type looks like it’s protective. Roughly, anywhere from 9% to 20% protective in terms of severity as well as susceptibility. That is exciting because I think it’s been replicated a number of times.

On the next big breakthrough in genetics

The next big breakthroughs are going to be around these polygenic risk scores and really starting to break down each disease into much more specific subtypes. Look at something like Type 2 diabetes where I can see that there’s a percentage of our customers that are genetically just much more likely to have it. You can see this also with drug response that some people are going to respond well to certain kinds of medications and some people are not going to respond well to those same medications. I think that every single disease is going to start to get classified into a genetically defined set of risks.

On the medical benefits of DNA testing

There’s no greater reward for me than knowing that we potentially prevented a preventable death … One of the mottos of the company is, “Change what you can, manage what you can’t,” and these cases where customers can learn that they have a potentially pathogenic mutation and there’s something that they can manage with a vasectomy or proactive screening and you can prevent a preventable death, it’s hugely rewarding.

On how money is made in healthcare

No one makes money in healthcare by keeping you healthy. Fundamentally, if I tell you, you’re diabetic, lots of people in the system, in the healthcare system as it is today, will make money, from the companies that make insulin to the needles to the testing to the doctor’s visits to all of the downstream consequences. If I tell you you’re genetically high risk for Type 2 diabetes and then you change your diet and you check in with your doctor and you’re like, “Yeah, I’ve lost weight. I’ve done this. I exercise more,” no one’s making money.

We’ve always said that we have no business if we can’t protect your privacy. We do everything we can reasonably to protect privacy … We were really lucky in that a number of our earliest engineers came from the banking industry and really came to us with a mindset of absolute privacy and choice and the highest level of security.

READ: Full transcript of our discussion with Anne Wojcicki