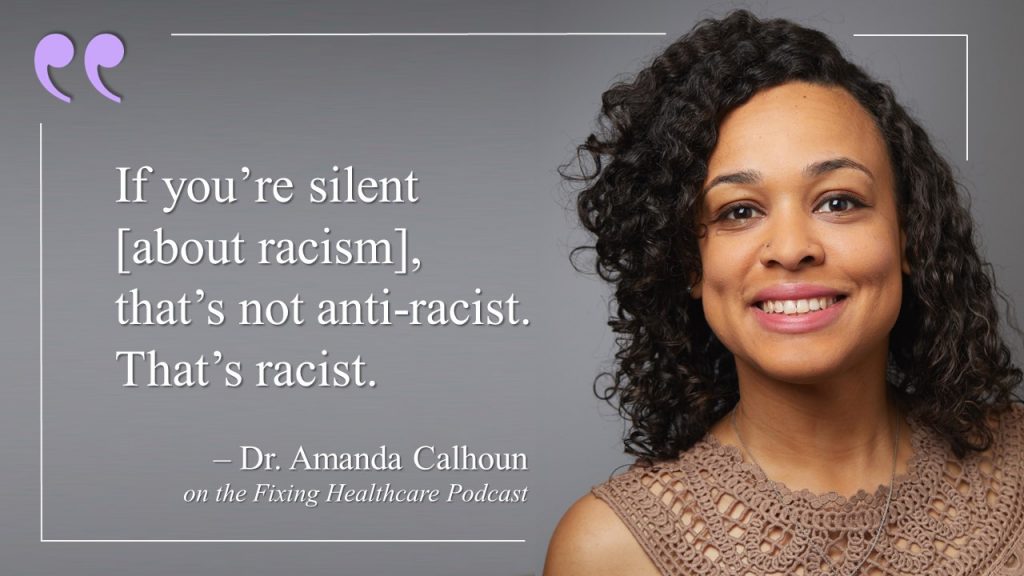 Back in June, a young Black physician stood outside the Sterling Hall of Medicine at Yale University with a sign in her hands that read: “Stop Killing Black People.”

Then she set down the sign, removed her mask, grabbed a megaphone and opened people’s eyes.

“My name is Dr. Amanda Calhoun,” she told the crowd, “and I am a Pediatrics and Psychiatry intern at Yale. But long before I was a doctor, I was a Black person in America. And this white coat does not protect me.”

This episode of Fixing Healthcare asks the question: Is the culture of medicine racist? Dr. Calhoun, an Adult/Child Psychiatry Resident at Yale and an emerging voice in the national discussion about race relations in medicine, believes every doctor should be an anti-racism advocate. She sat down with co-hosts Dr. Robert Pearl and Jeremy Corr to share her experiences and insights.

Season five of Fixing Healthcare focuses on the culture of American medicine, covering what Dr. Robert Pearl calls, “the good, the bad, the beauty, the ugliness, the things that inspire, and the things about which we are embarrassed.”

Highlights from Episode 27 with Dr. Calhoun

On Calhoun’s own experience with racism in medicine

I’ve been on units where it’s common to make jokes about a patient’s hair texture, it’s okay to joke and say that a Black patient wants to join a gang, to joke and say a patient is ghetto, to me that’s institutionalized racism because if you would go to the individual person, they would say they aren’t racist, but that’s really almost a racist institutionalized culture that’s been baked into the system and then people start to believe that it’s okay. It’s very insidious.

On distrust between black patients and white doctors

A lot of my Black patients have concerns about whether they trust what the attending is saying, whether doctors are going to be experimenting on them. And I’ve had colleagues say, ‘That’s so funny. That’s ridiculous. Why would we experiment on them?’ And I said, are you aware of Henrietta Lacks, the Havasupai Tribe lawsuit, Tuskegee, and a number of other studies that have shown that medicine has a history of experimenting on Black people and other people of color?

On undertreating pain in Black patients

On educating doctors about racism

A 2015 survey showed that white residents and medical students still felt that Black people felt less pain, which is wild to me because Black is a race. It’s not biological, right, it’s a social construct that was made up and they still think that Black people feel less pain. Then when you bring in the history of it, you start learning about J. Marion Sims, the father of gynecology, and the fact that he experimented on African slaves with anesthesia to perfect his vestigial vaginal fistula repair, and then would take those perfected procedures and perform them on white women with anesthesia. So you can see how this historical belief that Black people felt less pain has persisted and continues to persist today.

On sexism vs. racism in medicine

On getting Black people vaccinated against COVID-19

When this vaccine comes out it’s going to be very interesting because trying a new vaccine requires trust and I think that trust has been eroded and really, honestly eroded, and was never truly earned in the Black community. I think one of the biggest things that we can do as the medical system is work on rebuilding that trust with the Black community.

On Black mothers dying in childbirth

For me, as a Black woman, one of the studies that really touched me was looking at the rising maternal mortality in Black women due to preventable childbirth complications and the fact that for the longest time people were citing poverty and lack of education as the reason behind these racial disparities. However, recent studies have shown that college graduate Black women are more likely to die due to preventable childbirth complications than white women who have never completed high school. That argument that it’s just poverty, it’s just education, falls to the wayside when you still see that these disparities exist.

READ: Full transcript of our discussion with Dr. Amanda Calhoun

Listener note: Dr. Robert Pearl has spent years researching and reporting on the culture of medicine. That work will culminate in the publication of his 2021 book, “Uncaring: How Physician Culture Is Killing Doctors And Patients.” To learn more, subscribe to his newsletter Monthly Musings on American Healthcare.