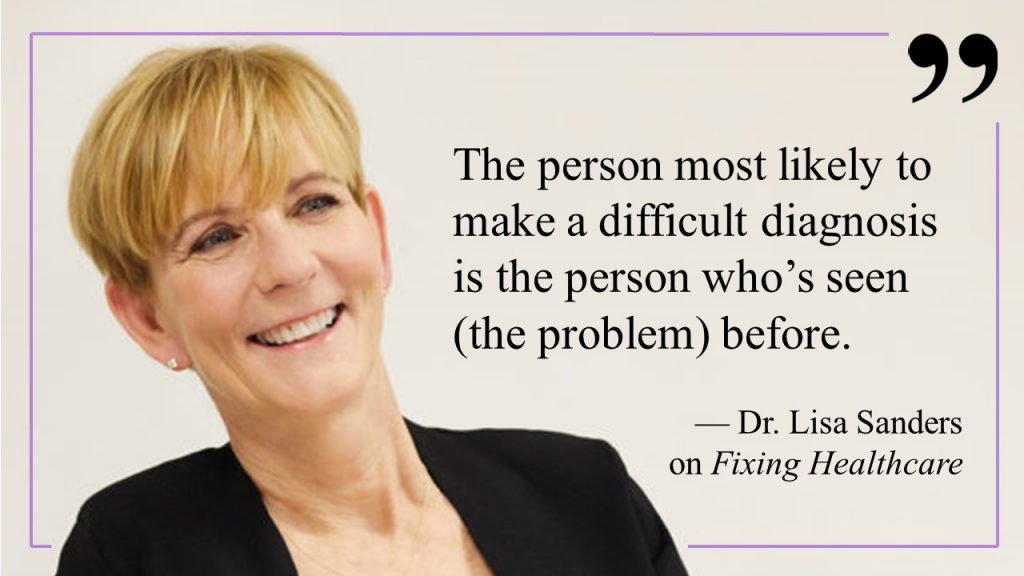 When the producers of Fox first reached out to Dr. Lisa Sanders with the idea of turning her New York Times column into a TV show called House, she was intrigued.

One of the executive producers replied, “Well, it’s about an irritable, arrogant and drug addicted doctor who hates patients and loves diagnosis.”

Dr. Sanders recalls thinking, “Who would watch such a show?” The answer, it turned out, was billions of people, thanks in part to Sanders, who agreed to become the show’s medical consultant.

Dr. Lisa Sanders is now an associate professor of internal medicine at the Yale School of Medicine and a contributing writer for New York Times Magazine. In 2019, Dr. Sanders created the Netflix miniseries Diagnosis, in which she relied on crowdsourcing to unravel complex medical mysteries.

In this interview, she diagnoses the invisible yet highly influential physician culture, looking at the many ways doctors both help and harm their patients.

Highlights from this episode with Lisa Sanders

1. On the conflict between compassionate care and computerized care

“Why would those be in contrast? It’s not like we’re suggesting that (doctors) should have four arms instead of two arms. We’re saying that they should have both a right arm and a left arm like everybody else. I mean, there’s not a choice between choosing technical expertise and choosing somebody you like. That’s just not a real choice.”

2. On dealing with sexism as a doctor

“I came from an extremely sexist business before going to medical school. I mean, before I was in medical school, I worked for CBS News, where if you blinked an eye when a cameraman called you hon, or a correspondent patted you on the butt, you were just in big trouble. You weren’t going to get anywhere. Very early in my professional life, I learned to just turn an eye and focus on what I needed to get done, because these jerks, you can’t fix them.”

3. On bringing medical culture into the 21st century

“Culture by its nature changes pretty slowly because it’s sub rosa. It’s not something that people embrace. The version of the Hippocratic oath that you took and that I took is different at every institution. It ain’t law, right? It doesn’t really reflect the real culture that exists here, that is so much more subtle and more amorphous than those little oaths that we all recite when we get our MDs. I think that the younger generations of women and men coming into medicine, pointing out the ways this culture doesn’t see them or sees them and thinks badly of them, or sees their patients and thinks badly of their patients, I mean, all we can do is try to work on our little plot of ground, because that’s how culture changes.”

“I think all of this surprise billing should just be banned. Period. I had to go in for a procedure not long ago, and at every step of the way, I said, ‘Can you assure me that everyone here who will be involved in my care takes my insurance, because I’m not going to pay any surprise bills?’ It’s ridiculous that somebody who’s sick has to do that, and yet, that’s where we are. That’s where we are because we have stopped thinking that rules are helpful. Rules are helpful.”

5. When college students ask about becoming a doctor

“I say it’s the best. It’s the best. I didn’t go to medical school, obviously, to make a lot of money. I say ‘obviously’ because not only am I an internist, which is I believe still third from the bottom of income scales with only pediatricians and endocrinologists below us. I’m a general internist, and I’m an academic general internist. Not only do I not make much money compared to everybody else, I make even less money by working through a university, but it doesn’t matter to me. That’s not why I did it. I think that when it comes down to it, people want to do the jobs that give them joy.”

6. On what doctors owe their patients

“Most of these people (who write to me) do not have rare diseases, but I think far too often, they don’t have a relationship with a doctor who’s paying attention. When I attend on the wards, I (see) patients who pass through the hospital untouched by human thought. Every single patient has to be touched by thought. That’s what I teach, and that’s what I try to practice. It’s what keeps medicine interesting is knowing that every single patient you see is different from everyone you’ve seen before, even though they might share similarities. I think that a lot of patients end up writing to me because they feel untouched by human thought.”

READ: Full transcript of our latest discussion with Lisa Sanders

Fixing Healthcare is now in its fifth season, which focuses on the culture of medicine. For Dr. Robert Pearl, this topic is of vital importance to the health and well-being of patients. For years, he has been researching and reporting on physician culture—efforts that will culminate in the publication of his 2021 book, “Uncaring: How Physician Culture Is Killing Doctors And Patients.”