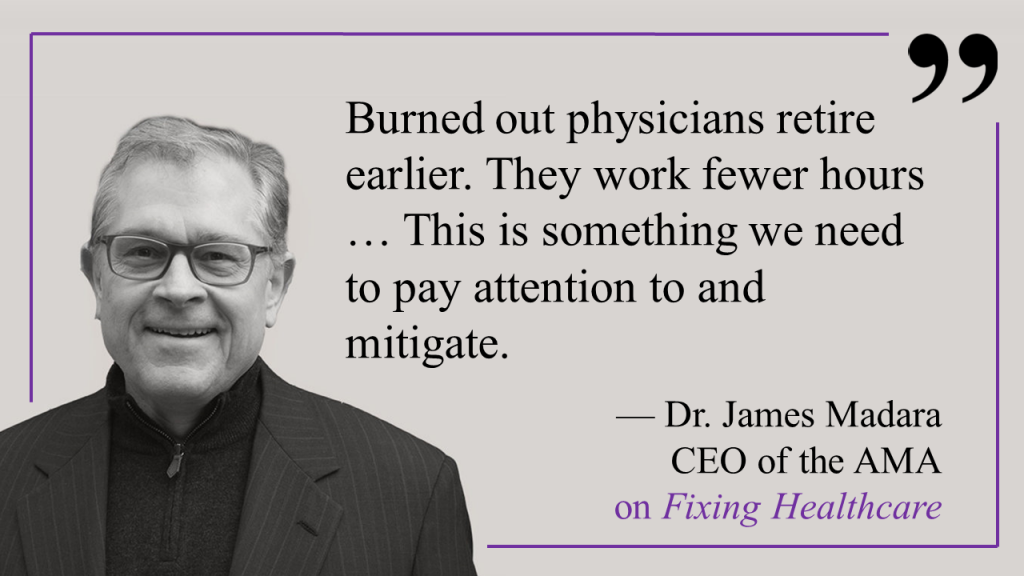 This episode kicks off season 6 of the Fixing Healthcare podcast and, this time around, cohosts Dr. Robert Pearl and Jeremy Corr are flipping the show’s format on its head.

Instead of asking each guest for a comprehensive plan to fix the entire healthcare system (a la ZDoggMD, Eric Topol and Don Berwick in season 1), Pearl and Corr are going vertical and deep—searching for solutions from those who represent the system’s various parts.

It begins with Dr. James Madara, CEO of the American Medical Association, the nation’s largest physician organization. Madara, now in his tenth year at the helm, shapes the AMA’s long-term strategy and chairs the AMA’s innovation arm, Health2047 Inc.

In this interview, he weighs in on the nation’s “tsunami” of chronic disease and the role doctors must play in making medicine more equitable. He talks about educating doctors for the 21st century and how AMA lobbies on behalf of its members.

On the AMA then vs. now

“We began as an organization that was focused on clinical ethics and education, and getting educational standards established for medicine, and there were none at that time. We were encouraged by the states to step into that space. As to the last 10 years, the more recent end of our spectrum, we have a rolling five-year strategic framework that has three components: Dealing with the tsunami of chronic disease, hypertension and pre-diabetes in particular … lifelong education, training physicians for the 21st rather than the 20th century … and then third is removing the many obstacles that interfere with patient-physician interactions, so that we can get better outcomes and a healthier nation.”

On the future of telemedicine

“In three months in 2020, telemedicine advanced in a way that I would think that it would’ve taken 10 years to advance … Within a period of two months, it wasn’t a 3x increase in telemedicine or a 10x increase, it was a 100x or more increase in telemedicine. I think not everything can be done by telemedicine. It’s hard to palpate the abdomen by telemedicine. But a lot can be done, and it could be upwards of 30, 40% of what needs to be done, particularly in follow-ups. Hopefully, the regulatory relaxation will be kept, and also the appropriate reimbursement so one can have a sustainable practice will also be kept.”

“Burned out physicians retire earlier, they work fewer hours, there are risks in terms of quality and adverse events. So, it’s something that we really need to pay attention to and mitigate … [Doctors] are in a cognitively complex field. Their intrinsic motivation is spent time with patients. Their reality is time with the computer and paperwork, and they end up burned out. And so, we have a lot of time that we could harvest from the physician workforce we have if we just made the environment around them function better.”

On the AMA’s code of medical ethics

“The first document produced by the AMA after its founding in 1847, that same year, was the first code of clinical medical ethics. I think that was the first code of clinical medical ethics in the world. It’s a one-pager, and a copy of it is hanging on the wall in my office. The current code of medical ethics runs over 300 pages and just went through a major update year before last because of all of the issues around transplant, treatment, harassment, these kinds of things. So, it is a living document. It is very complex and many institutions have adopted it for their own code as well.”

On the future of medical education

“In the future, how you learn may be more important than what you know. Of course, you have to have a base of knowledge, but having that base, you can never take a base of knowledge that is broad enough given today’s literature and numbers of diagnoses, the expansion of the literature that we have. So, that’s going to be very important. One of the ways that we’re thinking about that with our own ed-hub is to create a digital platform where education is much more easily accessed.”

On how the AMA lobbies for doctors

“At a meta level, we lobby for one thing, and that’s our mission statement. And the mission statement is to promote the art and science of medicine in the betterment of public health. And then, under that mission statement, are the policies of the house [of delegates] that make what we lobby for more granular. And those relate to the principles that I outlined … [which] include greater access, stronger safety net, stronger children’s health program, consistency in the healthcare system, removal of administrative complexity so people can spend time with patients, and patients seem to want that extra time with their physicians as well.”

The 2021 Fixing Healthcare survey is open for voting through July 30, 2021. Inspired by season 5 and its guests, this survey asks listeners to weigh in on medicine’s most problematic cultural issues. Hundreds of listeners have already voted. Add your thoughts. Vote now »