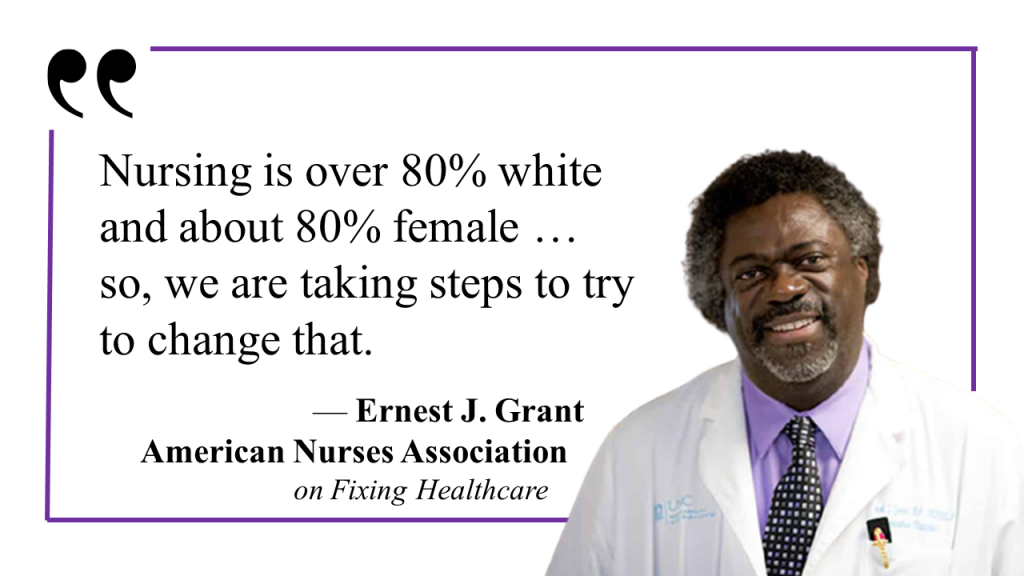 Our guest today is Dr. Ernest Grant, president of the American Nurses Association (ANA). He is the first male president in the organization’s 125-year history. And his passion for nursing can be traced back to his upbringing in the South as one of seven children in a very poor family.

“Even if I had won scholarships, I would not have enough to pay to complete undergrad and then go on to med school,” he explained to Fixing Healthcare cohosts Jeremy Corr and Dr. Robert Pearl. “So, my high school guidance counselor suggested going to the local community college becoming a nurse. About three months into that program, I forgot all about med school. I found out that nursing was my calling.”

Dr. Grant, himself, has more than 30 years of nursing experience and is a globally recognized burn-care and fire-safety expert. He received his PhD from the University of North Carolina and serves as an adjunct faculty member for the University of North Carolina Chapel Hill School of Nursing. In 2002 President Bush honored him with the Nurse of the Year award for the work he did treating burn victims after the World Trade Center tragedy.

On advocating for Black patients and nurses

“A lot of times what we see and hear is that nurses and/or the patients will say, ‘No one listened to me,’ or ‘I was not heard.’ … So, it’s a matter of nurses advocating to educate all the members of the healthcare team, not just nurses, but we’re (also) talking doctors, advanced practice nurses, PAs, all the way down the line to actively listen to what the person is saying.”

On Nurses being primary care providers

“I think that (nurses) have proven themselves over and over again that they are capable of doing that. And the thing that we have to realize that it’s a collaboration. It’s not one being better than the other. What skills does the nurse practitioner bring to the table that would be able to help that patient for that particular time? I mean, studies have shown that patients generally, overwhelmingly love the care that they do get from the advanced practice nurses. And I think part of that … is the fact that we tend to spend more time with (patients) and actually listening to them.”

“I will say that I may be the first (male president of the ANA), but I hope and pray that I’m not the last. It only took 122 years for the glass ceiling to be broken. I hope that I have blazed a trail for others to follow behind me. One of the things that I did run on my platform when I was running for my first election was to increase the diversity of nursing, because I strongly feel that nursing should be reflective of the people that we serve. And that includes not only increasing the diversity from a color perspective, but also from a gender perspective as well.”

On burnout in nursing

“I hear from nurses every day about the trials and tribulations that they’re having at the bedside. … They’re truly burned out as a result of having to work 13, 14, 16 hours or so … In an ICU, they don’t have time to even go to the bathroom sometimes during a 12-hour shift. If they’re lucky, they may get 15 minutes for a lunch break. These are working conditions that should not be.”

On the nursing shortage

“There’s such a severe nursing shortage. It’s estimated that by even just next year alone, we’re going to be down about 1 to 1.5 million nurses … At the university level or the community college level, they’re admitting students every semester in order to try to turn out more nurses to meet the demands of the workforce. The problem, however, is that there’s not enough clinical faculty and not enough clinical spaces.”