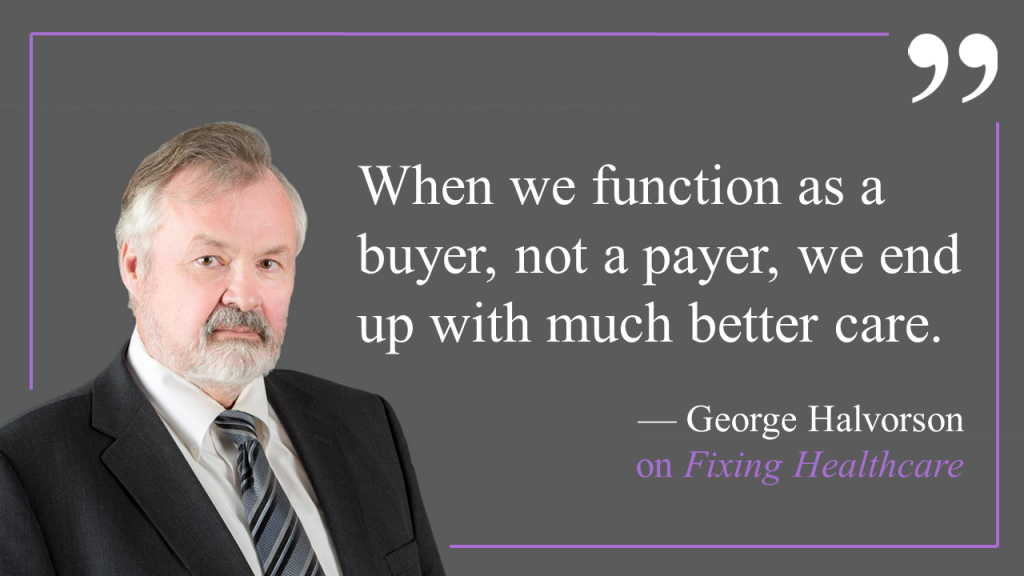 George Halverson was CEO of Health Partners in Minnesota for 18 years and CEO of Kaiser Permanente for 12.

As a health-plan leader, he spent 30 years fixing healthcare. He was successful in large part because he rejected what most Americans believe about health insurance. Halvorson believes better and more affordable healthcare is possible when people stop blindly paying for it and start assuming the role of buyer.

“I absolutely, totally believe that we have to become better purchasers of care as a country,” said Halvorson, who worked as CEO alongside Fixing Healthcare cohost Robert Pearl from 2002 to 2014 at Kaiser Permanente. “When we function as a buyer, not a payer, we end up with much better care. We can expect quality to improve. We can expect data to flow. We can expect teams to function.”

In this interview, Halvorson talks about health plans and the role of buyers. He also touches on the brilliance of Medicare Advantage, the bleak outlook for solo-practice doctors, and ways to improve healthcare for America’s most vulnerable populations.

On buying (rather than paying) for healthcare

“When we buy care as a package, when we buy care from plans, and when we expect the plans to deliver the care, we have a whole different leverage for purchasing. In that setting, we can expect quality to improve. We can expect data to flow. We can expect teams to function … Both Kaiser and Health Partners are care settings that deliver care in addition to insure care. And because of that and you know the results. We have half as many people with hospital admissions. We have far (fewer) people with asthma attacks. We end up with much better care because we can focus on the care and do a better job of care.”

On the solo-practice doctor

“When you’re a solo-practice doctor, and you’re just trying to keep up all by yourself, that’s really hard. There (are) 1,000 medical journals out there. But when you have a Health Partners or Permanente Medical Group, that group can keep up on all of the science, can distill the science, and then can pass the best current science onto all of the people on the care team. So, it’s really problematic to try to keep up with medical science outside of a group setting. But in a group setting, because of Permanente, Health Partners, Mayo Clinic do a really good job of keeping up. So I much prefer the model. I just think it makes huge sense. And I think the whole country needs to move in that direction.”

“Well, I think the differences between the not-for-profit and the for-profits were significantly greater a couple decades ago than they are now. As a not-for-profit health plan, we can focus on the wellbeing of the patient. I used to be chair of AHIP years ago. I was chair a couple times of the National Association of Insurance Companies and Health Plans. And one of the things, when we went down the path of improving quality in that context, we initially had some of the for-profit companies resisting going down that path. And they resisted because they had shareholder lawsuits, literally saying, ‘As shareholders, that those health plans should not be improving quality. They should be optimizing profit.’”

“Optum right now is trying really hard. Their self-image is that they’re going to deliver great and continuously improving care. That’s part of what they’re trying to push in their culture. And that’s also part of their market model. So, they have gone far down that road. And I know for a fact that the folks at Optum have studied Kaiser Permanente, studied stuff that you (Robert Pearl) had invented. They’re moving it into their setting. But they’re doing it with the belief that they will thrive over time by being best in care and not just best on underwriting and risk selection.”

On us vs. them in medical care

“We are wired instinctively to divide the world into us and them. We figure out who’s an us, we figure out who is a them, and when someone is an us, we’re supportive, we’re enabling, we do good things for us. And when someone is a them we’re suspicious, paranoid, territorial, distrustful. In healthcare, we end up with all kinds of negative consequences, unintended consequences by many well-meaning people who diagnose differently, or treat differently, or prescribe differently, and also who literally don’t trust.”

“He should make the Medicaid part of his agenda really clear. And a lot of the people who are opposed to him, politically, a disproportionate number of them need Medicaid and need to have a sense of that he is helping, steering them in that direction. I think on the Medicare side, the pure classic Medicare for all model has some support with some elements in the party, but it does not have support with the vast majority of Democrats. Unions don’t like it at all, because unions actually provide healthcare in good ways for their members.”