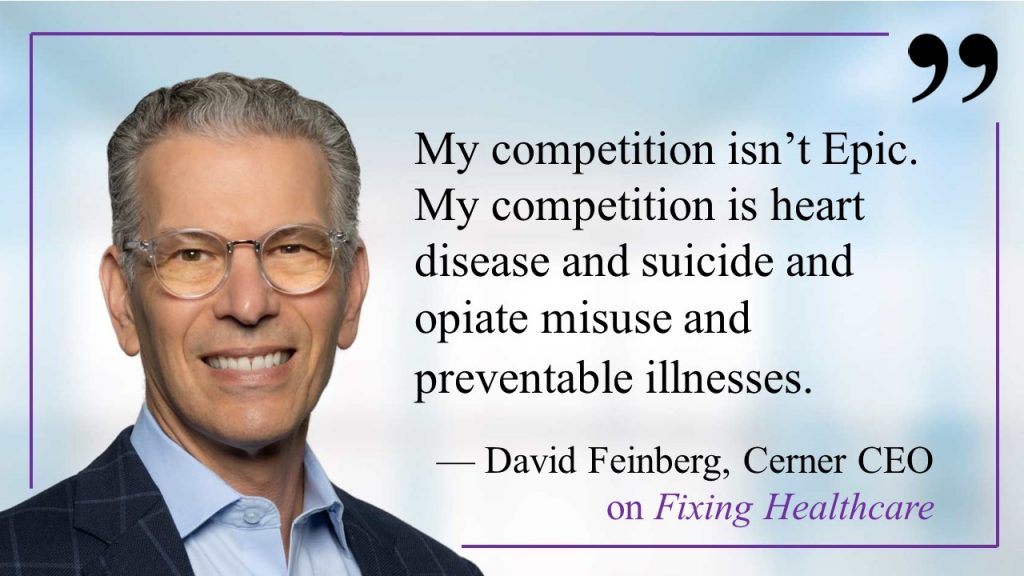 Just four months after Feinberg became CEO, and a little more than 24 hours ago, Cerner was acquired by database giant Oracle for an estimated $28.3 billion.

In this interview (which took place before the Cerner-Oracle news broke), Dr. Feinberg offers insights into following: what makes Cerner so valuable, the company’s longstanding competition with Epic, the immense potential for EHRs as a healthcare solution, and the challenges that remain for doctors who want to spend more time with patients and less time on their computers.

On Epic vs. Cerner

“Well, first of all, I said this really clearly to the [Cerner] board when they called me, my competition isn’t Epic. My competition is heart disease and suicide and opiates being misused and preventable illnesses and COVID. And I’ll do whatever’s possible to beat that competition. I have tremendous respect for Epic. Look, I’ve been a customer of Cerner and Epic. I’ve used the systems. I’ve used Meditech, I’ve used Athena. And I would say none of us, including Cerner, have built a tool that was really designed for the end user … If my family gets admitted to a hospital and they’re on a different system than Cerner, I want it to work. So I want all these systems to work. And if we really care about our communities, they need to work together.”

On the troubled history of EHRs

“When we think of electronic health records, the bill of goods we were all sold was this was going to solve a lot of problems. Now I think it’s been a heroic lift to get everything digitized, but in doing so we created some new problems around usability and we certainly haven’t realized the promise of what this was supposed to be. [EHRs] are not intuitive and easy to use, they’re not adding a lot … they haven’t really fixed underlying problems of making it easier to care for patients.”

On Cerner 10 years from now

“A decade from now I hope Cerner is seen as the foundation of data that is allowing doctors, nurses and families to be able to access data to better care for themselves. And I hope that that leads to a healthcare system that is much more equitable, much more cost effective, much easier, and convenient and more dignified.”

On big-tech companies in healthcare

“I think it’s going to be some of the big tech companies and some of the incumbents in healthcare realizing they got to [fix healthcare] together because for us, for example, we have the data, we have the trusted relationships. If you combined us with, and you can go through the list of Amazon or Microsoft, Oracle, Google, whoever, they have other expertise that when you bring it together could really get to that promise of what I think we all thought the electronic health record was supposed to do.”

On how EHRs can lower healthcare costs

Well, the [dollar] figure has to lower because if we don’t, we can’t build roads and schools and people won’t get wage increases and we’ll see a further gap between those that have, and those who don’t. I think it’s been the biggest crime in healthcare that we’ve allowed us, those of us in healthcare, that we’ve allowed this to happen … Using data to make better decisions around care is the way [Cerner] can help the most. So, hey, we’re expensive to put in. We got to prove that not only are we easy to use, which we’re not yet, but not only are we easy to use by using our tools, you’re able to care for more people, you’re able to drop the cost of your care, you’re able to make sure that nurses that are so expensive and so hard to get right now are just doing nursing and not worrying about working in an EHR as a data clerk. So that’s how I think we can join this solution and we’re totally committed to it.”

“The progress notes in the United States for patients are twice as long as the progress notes that they are in the rest of the world, even in the developed world, right? And so it’s not like our patients are sicker, although a lot of doctors always like to say that, it just means that we’ve added documentation that I’m certain isn’t adding value to care. It actually becomes so dense you can’t even find what you’re looking for if you’re a consultant or a doc taking over a case. So we’re really looking at how we can decrease it.”