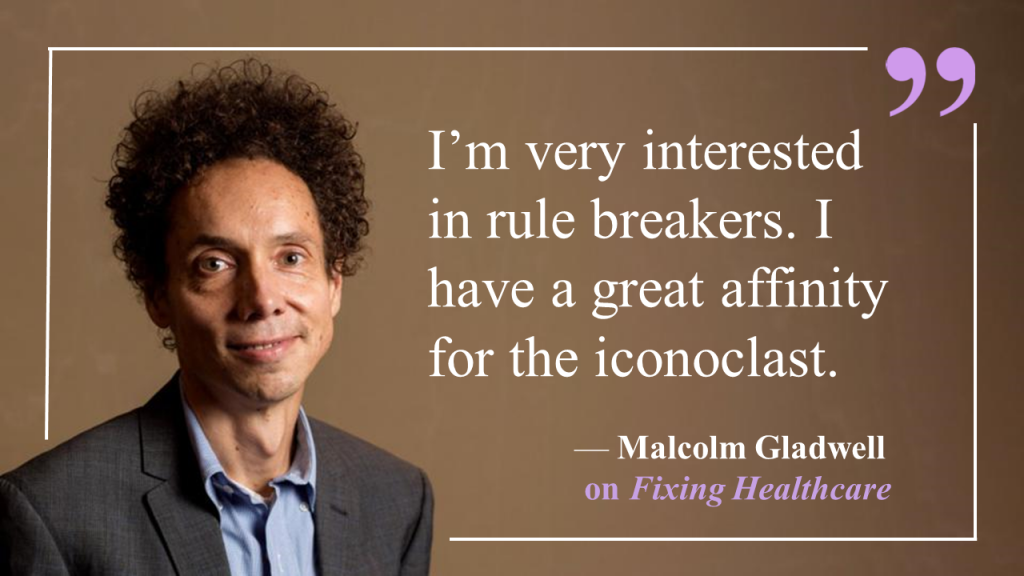 Some of medicine’s greatest breakthroughs began as seemingly crazy ideas. In the 1950s, for example, Dr. Emil Freireich hypothesized that the only way to cure childhood leukemia was to take young patients to the brink of death with combination chemotherapy. At first, Freireich’s colleagues called him a madman, a monster and possibly a Nazi doctor. Decades later, he is remembered as a trailblazing oncologist: the “father of modern leukemia therapy.”

When great ideas start out looking reckless or even insane, it’s difficult to separate the brilliant rule-breakers from the fools and sociopaths. The story of Elizabeth Holmes, the disgraced inventor and former billionaire, reminds us just how blurred the lines can become.

To help us sort out the iconoclasts from the quacks is an expert on rule breaking. Malcolm Gladwell is the author of five New York Times bestsellers, including “David and Goliath: Underdogs, Misfits, and the Art of Battling Giants,” and he is the first guest on season seven of the Fixing Healthcare podcast. He joins hosts Dr. Robert Pearl and Jeremy Corr to discuss the rules of rule breaking—and how they apply to American healthcare today.

On the personality of medicine’s rule breakers

“In David and Goliath, I wrote about a man named Emil Freireich who was maybe the most important pioneer in combination chemotherapy and he’s a classic example of a rule breaker … People thought (treating childhood leukemia with this regimen) was heretical and nuts … I mean, he was denounced, ostracized … And my conclusion was he was able to do what he did in large part because of his personality. He was simply someone who just didn’t care if everyone else thought he was a monster. And you need to be that way if you’re a rule breaker, right?”

On what it takes to break the rules

“You can’t be someone who’s too concerned about what your peers think and it’s really, really hard to find people who both have the imagination to break a rule and figure out a better way of doing things and also the strength of character to not care about the naysayers. It’s easy to find one of those traits and not the other. Very difficult to find both those traits in combination.”

On rule breakers vs. crooks or kooks

“The thing we have to keep in mind, I think, is when we make judgements of rule breakers, we may be right. There’s going to be some sociopaths mixed in there. I mean, there’s going to be the Elizabeth Holmes. She’s actually interesting … because that’s the kind of territory that she’s operating in, right? She’s selling her idea to a group of people who are aware of the fact that sometimes great ideas look crazy in the beginning … She goes to all these wise Silicon Valley people who have seen a version of this play out many times in the past and are aware of the fact that some percentage of truly brilliant, transformative, incredibly lucrative ideas look completely impossible and nuts out of the gate.”

“I don’t think that those who invested with Elizabeth Holmes are irrational. I think it’s rational for someone with a lot of money in Silicon Valley to make bets on crazy ideas because there are a lot of other crazy ideas that did pay off, right? Had she been right, that company would be worth, I mean, untold billions of dollars, right? Would I have given Elizabeth Holmes $10,000 in 2005 … had she approached me? I don’t know, probably if I had $10,000 lying around. Now as it turns out, she falls into either the sociopath or the fool category … but we don’t know in the beginning, that’s the thing.”

On the importance of having a vision

“[Rule breakers] tend to be people who have a vision, right? They are powered by something that’s really consequential and that motivates them. And I think there’s a version of that—that every one of these rule breakers has, which is they’re powered by a vision of whether they can make their world better.”

On defining a successful rule breaker

“I don’t think you can find a rule breaker who follows any path to success other than outworking the status quo or everyone else, right? What the rule breaker is, is someone who’s willing to commit themselves to an unpopular idea at a level that exceeds that of their peers. That’s my definition of a rule breaker. It’s not holding an unpopular position, that’s just a beginning. It’s are you then willing to bet a huge chunk of your own time, energy, career, what have you, on that idea? And it is the magnitude of the bet that makes you a rule breaker.”