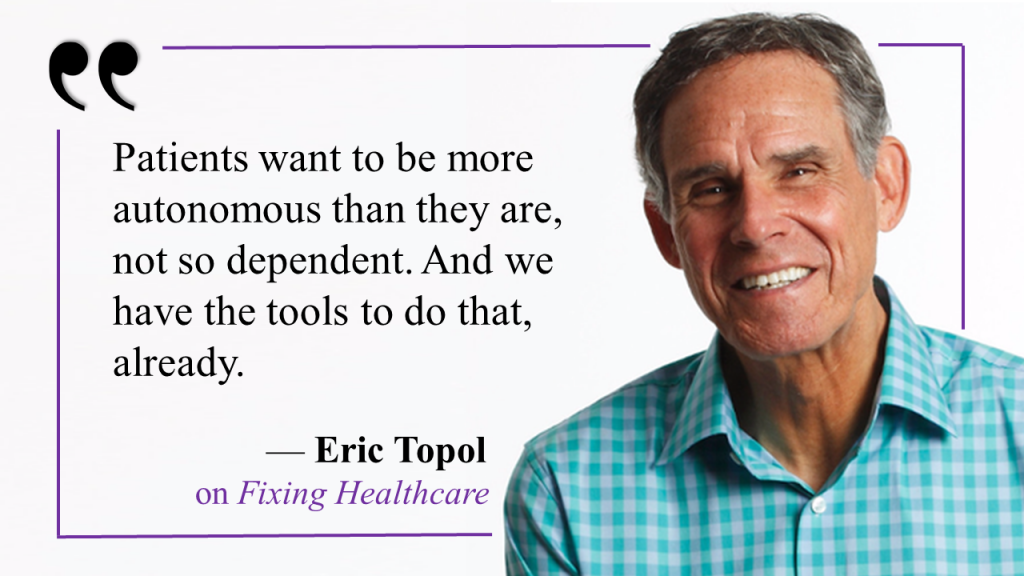 One hard part about interviewing Dr. Eric Topol is knowing where to begin.

Topol wears a seemingly infinite array of hats: He is the director of Scripps Research Translational Institute. He’s a professor of molecular medicine. He’s an expert on artificial intelligence, Covid-19, genome editing and precision medicine. He’s a bestselling author, the editor of the popular healthcare publication MedScape, and one of the most followed physicians on Twitter.

Thus, another hard part about interview Eric Topol is knowing you’ll always have far more questions than time to ask them. For this interview, the questions of cohosts Jeremy Corr and Dr. Robert Pearl center on rule-breaking in medicine—and, specifically, the unwritten rules doctors follow. Who better to ask than Topol, one of healthcare’s biggest rule breakers?

“We have a huge number, every year, of serious diagnostic errors. And our treatments are based largely in clinical trials, where maybe 10 people out of 100 in a really good trial might derive benefit. But the 90 people who don’t derive benefit, we give them the same therapy. That’s not exactly an accurate and precise way of delivering care. So, we can do far better, but it involves dealing with lots of data, a tsunami of data. And we aren’t well equipped to do that yet.”

On doctors who can’t handle the data

“The way things are in medicine, we can’t handle the data. So, we need to acquiesce and we need to say, ‘We need help.’ You’re well aware of the crisis, the global crisis we have of burnout, and disenchantment, and depression. Part of that is non-ability to care for patients because of being overwhelmed. And part of that being overwhelmed … is not being able to get our arms around all the data of any given patient because it takes time. But that’s what machines are really good for.”

On using smartphones in medical practice

“Part of the unwillingness for cardiologists to accept smartphone ultrasound is that their first reaction says, ‘Well, I don’t want have to do that. That’s what ultra-stenographers are for. I don’t want to have to acquire the images. That takes time and I’m not getting reimbursed for it,’ and every possible excuse. But in reality, every cardiologist should know how to acquire an echo … It takes just a minute or two. It’s so much more effective in time-use than with a stethoscope because you’re seeing everything.”

On what patients want

“They want to be more autonomous than they are, not so dependent. And we have the tools to do that. Already, we have emerging tools to deal with very common conditions like skin rashes and lesions through a smartphone picture and AI algorithm, ear infections for children, UTIs with an AI kit, heart rhythms through a smart watch. I mean, we have a lot of common diagnoses that are not life threatening that can be screened by patients and that list is just going to keep growing.”

On the Covid-19 vaccine-booster fiasco

“The biggest thing in my concern about the way the pandemic has been managed actually with the boosters, Robbie. I think this has been a fiasco. I think that we, as a country, are ranked 70th in the world for boosters in our population. We’re only at 30%, whereas most countries that you would consider peer in Europe or Asia are 70, 80%. And most importantly, in people over age 50, where in the US, 1 out of 125 Americans have died over age 50. And that’s for confirmed deaths, not even excess mortality in the COVID era. And we know that booster shots reduce death. They also reduce hospitalizations. They reduce long COVID.”

“I’m very into free speech. However, we need to, in my view, at least draw the lines about when there’s clear, unequivocal, medically harmful disinformation, lies, misinformation, fabrication, because we’re talking about people being hurt or dying from it. And so that’s different than expressing opinions or providing data that’s real instead of just making things up. And there’s been a lot of that. We’re not talking about Galileo here. We’re talking about people who are purposefully, if not unwittingly, trying to hurt a lot of people.”