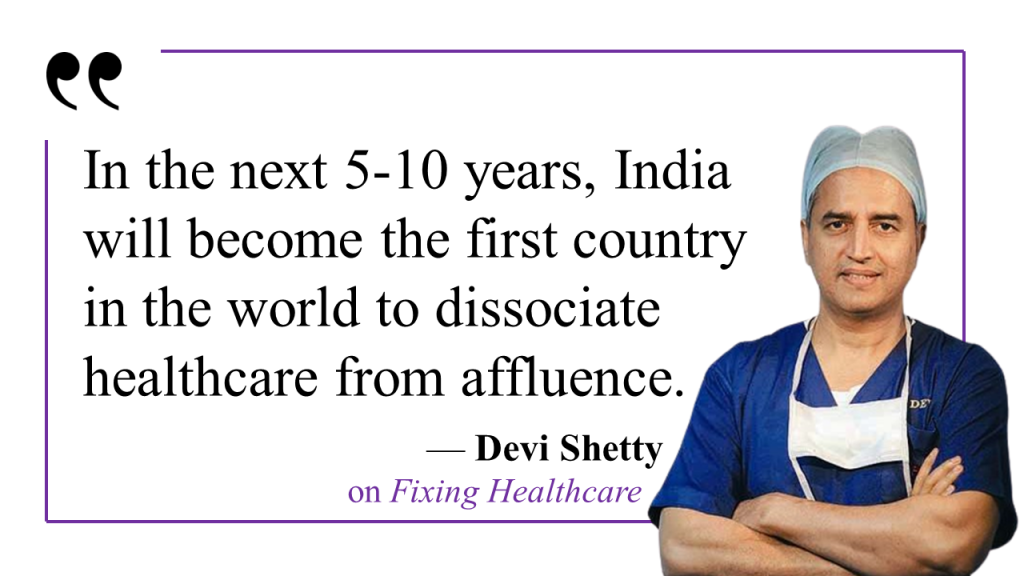 Dr. Devi Shetty returns to the Fixing Healthcare podcast this week—making his first appearance on the show since 2019. At that time, listeners wrote in and posted messages on social media, expressing astonishment at Dr. Shetty’s accomplishments and outlook on healthcare.

This success was made possible only by breaking the traditional rules of healthcare. In this interview, hosts Jeremy Corr and Dr. Robert Pearl ask Dr. Shetty about the rules of American medicine that must be broken in order to replicate the success he (and his hospitals) have achieved.

On breaking the rule of expensive healthcare

“If a solution is not affordable, it is not a solution … But sadly, after spending $10 trillion (on global medical care), less than 20% of the world’s population has access to safe, accessible, secondary and tertiary level healthcare … So we have to break the rule and we have to do everything possible to make healthcare accessible, affordable, and safer for the patient.”

On putting a price on human life

On caring for Mother Teresa

“I was privileged to be living in Kolkata at that time, and Mother happened to have a cardiac ailment. I was a senior doctor (of heart surgery) in the city, so it’s just a coincidence or God’s blessings that I had the privilege of being close to Mother when she needed the doctor’s help. And I’m grateful to God for the opportunity.”

“There was a drought in the state of Karnataka, where I live. So, farmers lost their capacity to pay for the healthcare. At that time, we approached our government …  we told the government that if the (state) cooperative society members pay 11 cents per month, that’s approximately the price of one packet of cigarette or Beedi … that money he pays for his health insurance. And initially we had about 4.5 million people paying 11 cents per month. The insurance pays for the surgeries, starting from a routine surgeries like gallbladder, hernia, cesarean section to heart operation, brain operation, everything is cover … Over 1.5 million farmers had varieties of surgeries and about 130,000 farmers had a heart operation. All this was done with 11 cents per month. Poor people in isolation are very weak, but together they’re very strong.”

On disrupting the cost of healthcare

We are living in an amazing country, which supports innovation and supports a new way of doing things. I have no doubt that within the next five to 10 years, India will become the first country in the world to dissociate healthcare from affluence. India will prove to the world that the wealth of the nation has nothing to do with the quality of healthcare its citizens can enjoy. I have no doubt about it.”

On inspiring the next generation of healthcare rulebreakers

“I’m convinced that when you strive to work for a purpose, which is not about profiting yourself or your own personal interest, if the purpose of our action is to help the society, mankind on a large scale, cosmic forces ensure that all the required components come in place and your dream becomes a reality. I have no doubt about it. I have noticed this so many times, whatever we could do in India, if you really sit back and analyze it scientifically, lot of things couldn’t have been done, but it happens mainly because of the impact which is going to touch millions of people.”