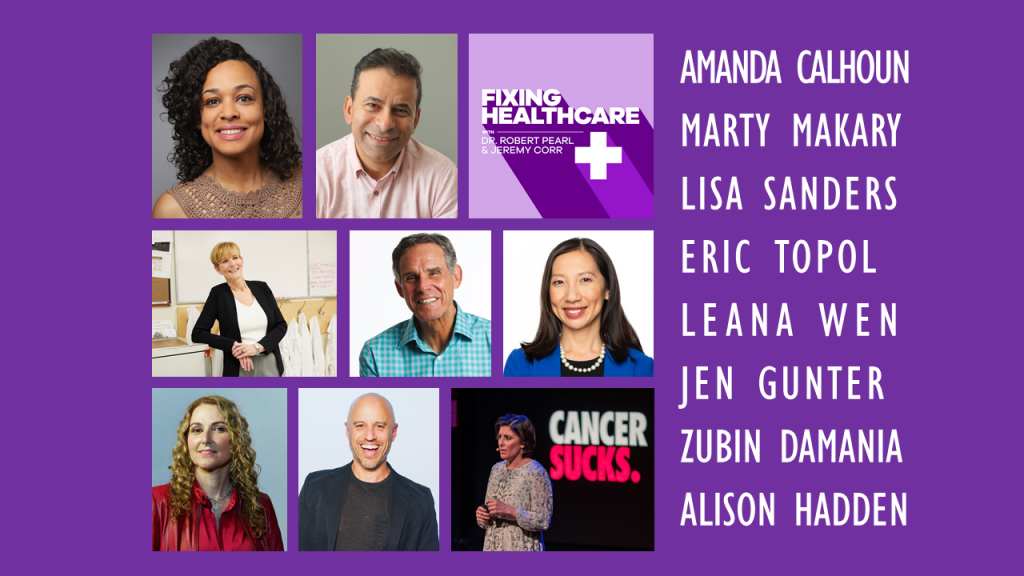 However, contrary to what most people believe, fixing the system won’t be enough to solve healthcare’s biggest problems. We must also address the invisible and highly influential culture of medicine, which is rooted in the norms and values doctors learn in medical school and carry throughout their careers.

Culture was the focus of Season Five of the Fixing Healthcare podcast, which featured eight insightful episodes. In this final episode of the season, co-hosts Robert Pearl and Jeremy Corr recap the lessons learned from some of nation’s most respected leaders in public health, technology, medical culture, and patient advocacy.

LOOKING BACK AT SEASON FIVE

Fixing Healthcare welcomed its first ever returning guest, Zubin Damania, a physician and entertainer known to his legions of followers as ZDoggMD. Damania hosts the internet’s No. 1 medical news and entertainment show, and is a leading voice for patient-centered healthcare, focusing on prevention and team-based medicine. Key quote: “Part of the culture of medicine is that our payment models have changed how we actually view what is right and wrong. And that’s been a real problem in moving forward with any kind of real change in medicine. So, medicine by its nature, by its culture, resists change.”

Dr. Amanda Calhoun is an Adult/Child Psychiatry Resident at Yale and an emerging voice in the national discussion about race relations in medicine. She gained national attention at Yale’s White Coats for Black Lives event. She believes every doctor should be an anti-racism advocate. Key quote: “You’re either actively working against racism and you’re actively supporting policies and behaviors that are working to rectify a racist system, or you are upholding a racist system … because if you’re just silent, that’s not anti-racist, that’s racist.”

Dr. Eric Topol is a cardiologist, geneticist, researcher and pioneer in the field of digital care. He has published three bestselling books on the future of medicine and serves as editor-in-chief of the popular healthcare news site Medscape. As founder and director of Scripps Research Translational Institute, he is on the cutting edge of genomics and individualized medicine. Key quote: “The problem we have in AI medical research, it’s always ‘man versus machine.’ With few exceptions, what it should be is man plus machine. The sum of the parts is greater than either of the components.”

Dr. Leana Wen is an emergency physician and a public health professor at George Washington University. She’s also a contributing columnist for Washington Post and an on-air medical analyst for CNN. Previously, she served as Baltimore’s health commissioner. Wen spoke powerfully about the difficulties patients face in their communities and how physician culture has been reluctant to take on the social determinants of health. Key quote: “Isn’t it our responsibility as physicians and as healthcare workers to tackle [societal] issues when that’s ultimately the root of illness? Otherwise, we’re only addressing the symptoms and not the cause.”

Dr. Lisa Sanders is an associate professor of internal medicine at Yale and a contributing writer for New York Times Magazine. Her career served as the inspiration for the television series House for which she was a medical consultant. In 2019, Dr. Sanders created the Netflix miniseries Diagnosis. She talked on Fixing Healthcare about the struggles of primary care in the context of medical culture. Key quote: “We pay an invasive cardiologist five to 10 times more than we pay internists, even though I think it can clearly be shown that general internists save more lives than those interventional cardiologists.”

Dr. Jen Gunter is an obstetrician gynecologist specializing in chronic pain. She’s also a New York Times columnist, and the author of “The Preemie Primer: A Complete Guide for Parents of Premature Babies.” Her new book “The Menopause Manifesto” is now available in paperback. Gunter’s comments focused on women’s health and the issue of sexism in medicine. Key quote: “I was in medicine 20 years before there was a woman who was the chair of my department, so I think that says something.”

Alison Hadden is a lifelong athlete, an adventurer and was, by age 38, a marketing executive at three different billion-dollar tech companies. But in 2018, Alison says “life burst through the door.” She was diagnosed with advanced breast cancer. Three years later, she is grappling with a terminal diagnosis. In this interview, Hadden shared her perspective as a patient. Key quote: “I wasn’t eager to talk about death or dying because in my mind, I was going to beat this thing. And now, I feel that if doctors only knew that talking about [death] is actually healing.”

The final guest on Season Five was Dr. Marty Makary. He practices surgical oncology at Johns Hopkins, wrote the book “The Price We Pay” and has published over 250 scientific articles, including many on the redesign of healthcare. He has spent most of his career trying to improve the quality and safety of healthcare. Key quote: “Let’s talk about patients falling through the cracks of our complicated system. Let’s talk about [doctors] doing unnecessary things or prescribing [medications] people don’t need. We just went from 2.4 billion prescriptions 10 years ago to 5 billion last year. Did disease really double in 10 years?”

Read: The full transcript from the Season Five recap

For Dr. Robert Pearl, the culture of medicine is a topic of vital importance. For years, he has been researching and reporting on physician culture—efforts that led to the publication of his new book, “Uncaring: How Physician Culture Is Killing Doctors & Patients.”